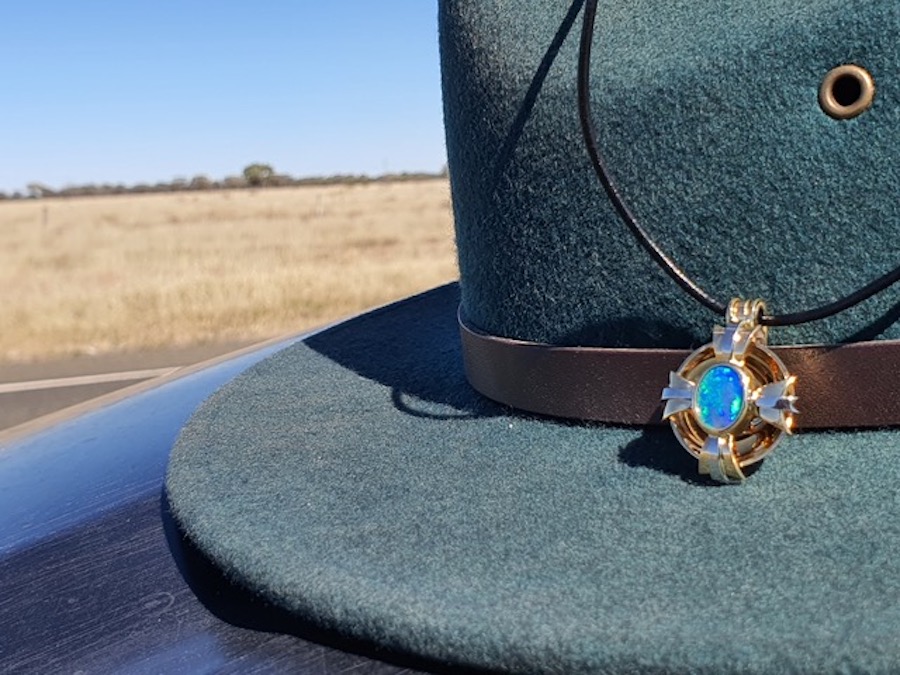 Third-year apprentice Adrian Hogan has won the Emerging Category – Jewellery Design at the Queen of Gems International Jewellery Design Awards, which are hosted by the Queensland Boulder Opal Association and held during the annual Opal Festival in Winton.

Describing the creation of his piece, Hogan – a self-described “opal addict” – said, “I was inspired to create this piece by rays of starlight and the rich glow of a coral reef. The rolling curves of the star’s rays take influences from the slow waves of the ocean and the natural flow of the body of a sea urchin.”

‘Reef Glow’ was Hogan’s first-ever entry into the competition, which he learnt about four years ago while fossicking for opals near Winton.

“I certainly wasn’t expecting to win anything, and the quality of the other entries was awe-inspiring, so winning was an amazing surprise,” he said.

Hogan was awarded $1,000 in prize money and a certificate.

Alongside running opal cutting and dealing business, Match Maker Opals, Hogan is currently undertaking a Certificate III in Jewellery Manufacture at TAFE Queensland, combined with an apprenticeship with Matthew Alexander Jeweller in Brisbane.

Dr Brian Heim, general manager of TAFE Queensland, said of Hogan’s winning entry, “It is incredible to think that this stunning piece was created by a student who is just starting in the jewellery manufacturing industry.

“I’m proud that TAFE Queensland is producing apprentices with the skills that make them employable now and well into the future,” he added.

Hogan plans to enter the Queen of Gems competition again in 2022 in the Professional Category, adding, “Now I need to find the perfect stone I can start cutting, polishing and bringing it to life.”

The other winners at this year’s QBOA Queen of Gems International Jewellery Design Awards were Rita Williams, whose piece ‘Renewal’ took the top prize, the People’s Choice Award, followed by Angela Hampton’s ‘Peacock’ which won the High Commendation, and Robyn Carmichael’s ‘The Heart of the Reef’, which earned the Commendation title.