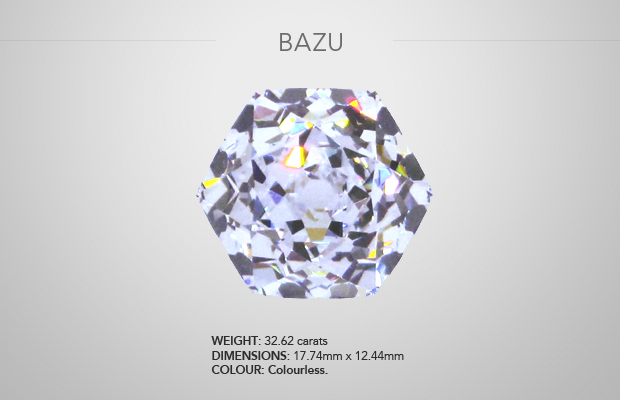 The Bazu was a colourless stone of 32.62 carats. It has only been mentioned once in history, but what a time!

It was the largest diamond set with the French Blue in an ornament called The Order of the Golden Fleece created by King Louis XV around 1749 and also employing the 107.88-carat Cote de Bretagne spinel, three large yellow topazes, a handful of 5-carat diamonds and several hundred 0.1-carat diamonds.

At the time, this ornament was considered to be the most lavish and -expensive single piece of jewellery in all of Europe.

The Golden Fleece was stolen along with many of the French Crown Jewels in September, 1792. It was apparently broken up, with the French Blue recut into the Hope diamond. The Cote de Bretagne spinel was recovered many years later but all other stones have since disappeared into the mists of history.

The Bazu was also the largest diamond cut in the form of a regular hexagon. The replica shown here is the only one known to exist, and is the result of on-going research concerning the Hope and French Blue diamonds.