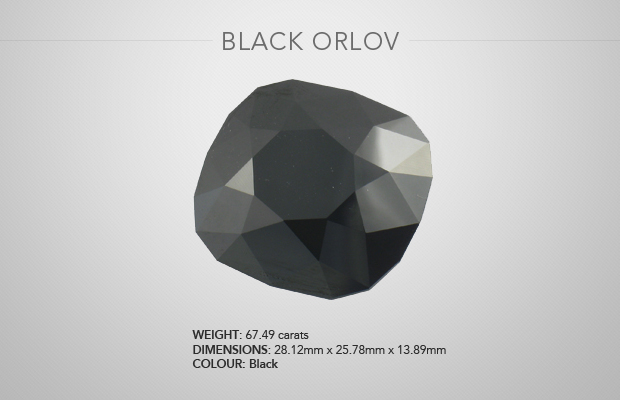 According to the legend, the 67.50-carat, cushion-cut Black Orlov is said to have taken its name from the Russian Princess Nadia Vyegin-Orlov, to whom it belonged during the mid-eighteenth century.

Myths about the stone

Unfortunately, this tale of origin is almost certainly false – there is no documentation of Russia having had a princess by that name, or of India having produced any black diamonds of note. In fact, the history of this so-called black diamond – actually a very dark gun-metal colour – is shrouded in mystery.

Legend has it that the Black Orlov was once known as the Eye of Brahma, an uncut stone of 195 carats set into an idol in Pondicherry, India and stolen by a monk.

What is known is that the Black Orlov was owned by New York City gem dealer Charles F. Winson, who valued it at $US150,000 in the early 1950s and exhibited it at the State Fair of Texas in 1964.