Costco’s diamond and jewellery sales boom; history in the courts 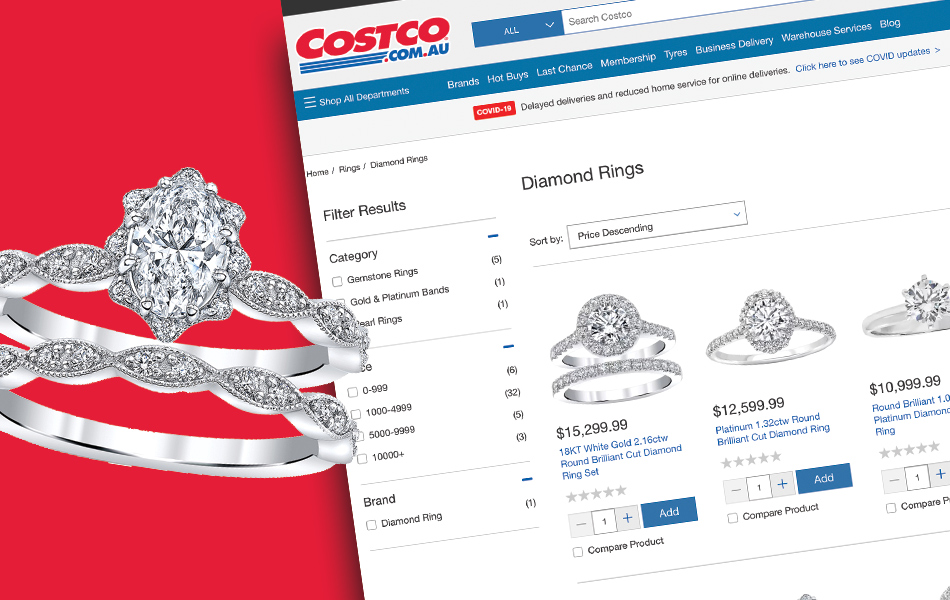 When Costco opened its first Australian store in 2009, few people would have believed that the US-style, large-format supermarket chain would offer diamonds and jewellery among the meat and vegetables aisles, let alone that they would become a major product range.

The results are recorded to 31 August each year.

Patrick Noone managing director Costco Australia told The Australian that the company had performed strongly throughout the COVID-19 pandemic and the resulting travel restrictions, and that Costco’s jewellery category was increasing sales in the face of the company not being considered as a ‘typical’ shopping choice for a diamond engagement rings.

“Jewellery has done exceptionally well for us this year, I think people are at home and getting married, having babies and a lot of diamonds have been selling,” Noone said in The Australian article titled, Diamonds are Costco’s best friend as sales in Australia race to $3bn.

“Diamonds did well, we sell gold, and that surprised us a bit as well in terms of selling well, I think it is mainly we are getting traction with the quality of the goods, we are seeing $10,000 diamond rings being sold for weddings, $15,000 earrings and things like that and when people compare the quality out there in the market place and the savings it has proven popular,” Noone said.

On 9 December, during an Earnings Call – a conference call between the management of a public company, analysts, investors, and the media to discuss the company’s financial results during a given reporting period – Galanti told participants that jewellery was among Costco’s strongest departments with a 20 per cent jump in total revenue to $US1.67 billion for the quarter.

The Motley Fool finance website reported that Galanti said: “We actually sold a couple of rings in the $100,000 range.”

“In terms of e-commerce sales in the quarter, ex FX [foreign exchange] increased 13.3 per cent year-over-year, and that’s, of course, on top of an 86 per cent plus increase a year ago in the first quarter. Stronger department in terms of year of percentages include jewellery, tyres, and home furnishings.”

During a March 2020 Earnings Call, Galanti said, “We recently sold another high-value large carat diamond for a little over $US600,000″, while in May 2019 he claimed a customer had purchased a $US400,000 diamond ring from the supermarket.

Costco is reported to be North America’s fourth-largest retailer of fine jewellery and watches after Signet, Walmart and Tiffany, however; the company’s jewellery and watch departments have not been without controversy and legal action.

In 2010 Swiss watch brand Omega began, what was to become a long legal battle to stop Costco stocking and selling its watches at massive discounts – reportedly up to a third less than US retail.

While that case was proceeding – it eventually took five years – Tiffany & Co., the iconic US jewellery brand, began legal proceedings to stop Costco from selling, what it described, as counterfeit diamond engagement rings bearing the luxury retailer’s name.