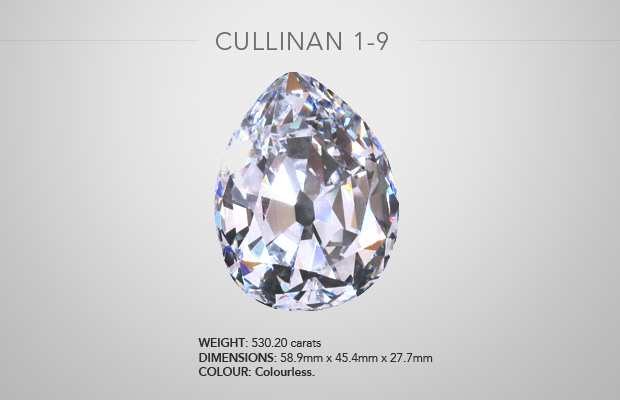 Weighing in at a whopping 3,106 carats, the Cullinan is the largest gem-quality diamond ever discovered.

It was found in 1905 by Frederick Wells – the superintendent of the prolific Premier Mine in South Africa – who was attracted to a reflection while making a routine inspection trip through the mine. Eighteen feet below the surface of the earth, Wells noticed a shiny object on the steep wall of the mine a few feet above him. Such was the Cullinan’s initial size, that Wells thought he’d uncovered a massive piece of glass.

Wells named the Cullinan after Sir Thomas Cullinan, who had visited the mine the previous day. Shortly following its discovery, it was sold to the Transvaal Government and presented to King Edward VII on his 66th birthday (November 9, 1907). King Edward promptly insured the stone for $US1.25 million and sent it to Amsterdam gem house Asscher’s Diamond Co. for cutting.

Asscher’s reputation for cutting large stones preceded it, having handled the Excelsior diamond, but never had the house had anything as large as the Cullinan. The pressure of the job was tremendous and Asscher staff studied the diamond for months before, on February 10, 1908, Joseph Asscher placed the steel cleaver’s blade into an incision half-an-inch deep and tapped it once with a heavy steel rod.

The blade broke, but the diamond remained intact!

Asscher attacked the stone a second time, and this time it split in two with such ease that Asscher is said to have feinted on the spot.

“The tale is told of Joseph Asscher, the greatest cleaver of the day,” wrote Matthew Hart in his book Diamond: A Journey to the Heart of an Obsession, “ that when he prepared to cleave the largest diamond ever known, the 3,106-carat Cullinan, he had a doctor and nurse standing by and when he finally struck the diamond and it broke perfectly in two, he fainted dead away.”

It is unlikely that this really happened – it’s more of a fisherman’s tale than fact – but such an embellishment acts as a wonderful testament to the magnitude and power of the great stone.

Asscher persevered, making a second cleavage in the same direction that produced three principal sections. These sections would go on to yield nine major gems, 96 smaller brilliants, and 9.50 carats of unpolished pieces.

The nine largest stones remain either in the British Crown Jewels or in the personal possession of the Royal Family. These celebrated gems and their current settings are as follows:

• The Cullinan I, also known as the Star of Africa, weighs 530.20 carats and was the largest polished diamond in the world until the discovery of the 545-carat Golden Jubilee diamond – also found in the Premier Mine. King Edward placed the Cullinan I in the Sovereign’s Royal Sceptre as part of the Crown Jewels, and it is now on display in the tower of London.

• The Cullinan II is a 317.40-carat cushion-cut stone mounted in the band of the Imperial State Crown, and also in the Tower of London as part of the Crown Jewels.

• The Cullinan III is a pear-shaped diamond weighing 94.40 carats and set into the finial of Queen Mary’s Crown. It can be worn with Cullinan IV as a pendant-brooch and many of Queen Mary’s portraits show her wearing these two stones in a manner popular with Queen Elizabeth II still today.

• The Cullinan IV, a 63.60-carat cushion shape, was originally set in the band of Queen Mary’s crown. As mentioned above, it can also be worn as jewellery alongside the Cullinan III.

• The Cullinan V is a triangular-pear cut weighing 18.80 carats originally mounted in a brooch for Queen Mary to be worn in the circlet of her crown as a replacement for the Koh-i-noor. This was after the Koh-i-noor was removed to sit in the new crown that was made for Elizabeth (now the Queen Mother) in 1937.

• The Cullinan VI – an 11.50-carat, marquise-cut stone, was presented by King Edward to his wife Queen Alexandra, and is now worn by Elizabeth II as a drop on a diamond and emerald necklace. It has adorned the young Queen more frequently than any other section of the Cullinan.

• The Cullinan VII is an 8.80-carat marquise-cut stone mounted in a pendant on a small diamond brooch that also contains the 6.80-carat cushion-cut Cullinan VIII.

• The Cullinan IX, a 4.39-carat pear shape, is mounted in a ring with a prong setting that was made for Queen Mary and still worn by the current queen, Elizabeth II.

To this day, speculation is rife that the huge Cullinan diamond discovered in 1905 is only a fragment of its former size and that another piece is either still awaiting discovery or was crushed in the mining process.

The latter is very unlikely; however, the prospect of finding the portion of the Cullinan has added zest to the activities of numerous miners and prospectors.