Diamond Council pushes to expand the definition of conflict diamonds 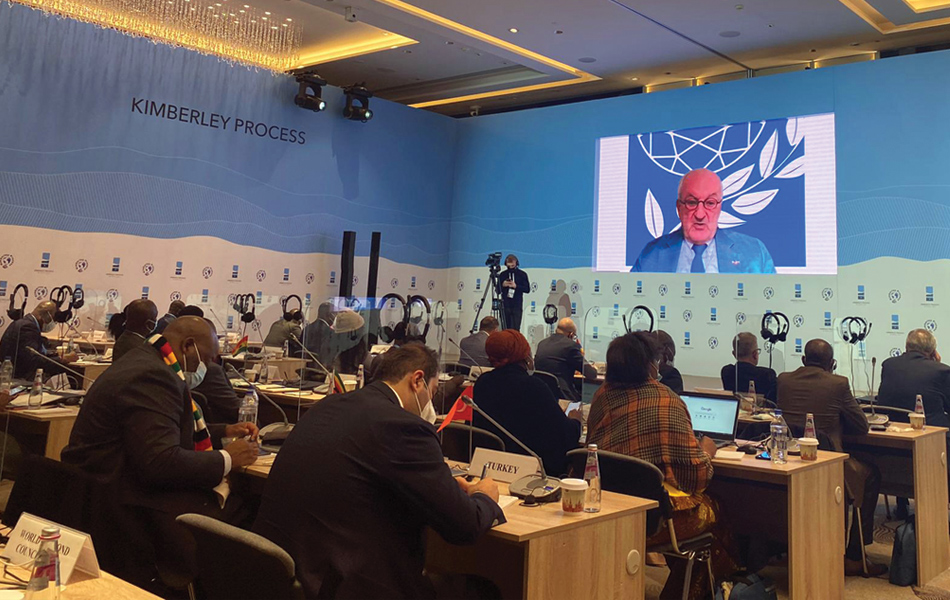 Addressing delegates during the opening session of the 2021 Kimberley Process Plenary in Moscow, Asscher noted that young consumers are becoming increasingly aware and expressing their demand to know the environmental and social credentials of their purchased products, especially diamonds.

“The diamond is a product that has the potential to both speak to the aspirations of this new generation, as a natural resource with the potential of providing sustainable economic and social opportunities to the communities that produce it, or be rejected, as a non-essential luxury item,” Asscher said.

“We have the ability to decide that choice, but we will do so only through actions and not empty words.”

Asscher’s challenge came in light of what he considered as the Kimberley Process being “unable to deliver progress” on the matter, asking delegates, “why do we persistently fail to make substantive progress on expanding the definition of conflict diamonds – a move that almost all of us understands is necessary?”

The WDC president reiterated a statement he made during the KP inter-sessional meeting in June about the risks of an emerging two-tier diamond industry.

“The upper, more established tier of companies, which are able to independently monitor their supply chains, is able to meet consumer expectations. But the lower, less established tier, will see its market share diminishing, often through no fault of its own,” Asscher said.

Such outcomes would affect “the individuals, communities and entire economies that rely on revenues generated by diamonds for their livelihoods and future development.”

Asscher stressed the importance of the WDC System of Warranties launched in September and plays a key role in avoiding such risk by reinforcing the trade of Kimberley Process Certification Scheme(KPCS) compliant diamonds throughout the supply chain employing anti-corruption and anti-money laundering practices, while adhering to universal human and labour rights.

He also expressed the WDC’s dismay over the budget veto in the UN Security Council for the panel of experts in the Central African Region (CAR), which is the UN’s “eyes and ears” that report objectively on issues and problems in the region.

Currently, there is no reason to expand green zones in CAR, as artisanal diamond mines producing KP-compliant exports are consistently being monitored by the WDC, according to Asscher.

“Furthermore, if the conditions of the new operational framework are not met, we should return to the old framework. In other words, we should go back to carrying out inspections before a shipment is approved for export from CAR, rather than following up after the shipment already has taken place,” Asscher added.

The Great Diamond Debate is a collection of special edition publications covering the international diamond market. They have attained enormous readership and respect worldwide – the digital versions have achieved more than 90k impressions, in addition to the print editions.