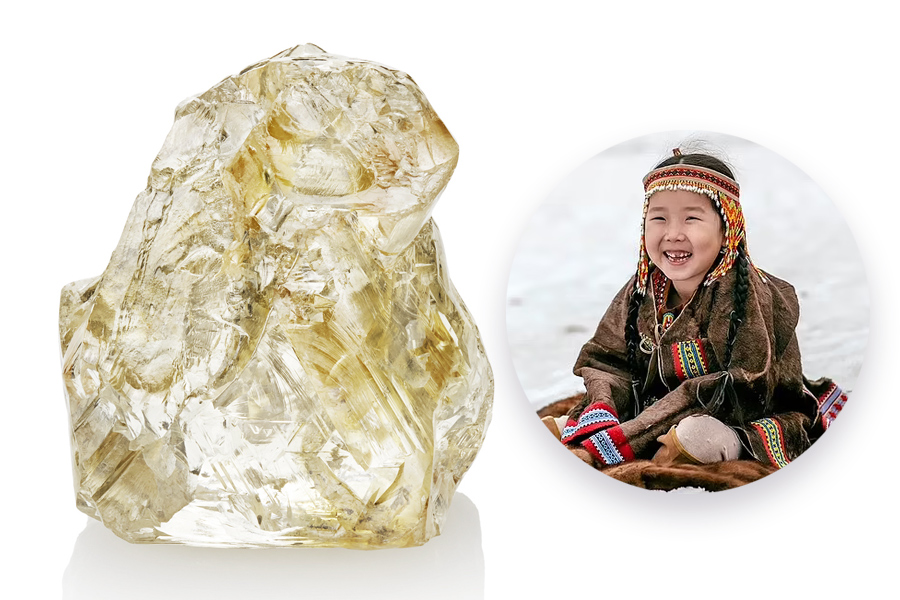 A 91.86-carat yellow-brown diamond mined last year has been named ‘Kyndykan’ in honour of an indigenous folklore heroine who survived a pandemic that wiped out a nomadic community 200 years ago.

The diamond was found in Yakutia in the Arctic territory of Russia – one of the coldest regions in the northern hemisphere – from one of the alluvial diamond deposits of Diamond of Anabar-a subsidiary of Russian state-owned mining company Alrosa.

According to Evgeny Agureev, deputy CEO, Alrosa “We have a great tradition of giving names to newly mined diamonds. On this occasion, we decided to name a diamond mined in the Far North in honour of the little Even heroine Kyndykan and after a wonderful project, which is doing a lot to ensure that voices of indigenous peoples of the North are heard.”

Kyndykan was a young Even (one of Yakutia’s indigenous tribes) girl who was miraculously rescued by hunters near the Verkhoyansk Mountains. She was the lone survivor in an ancestral settlement that was decimated due to a smallpox outbreak.

The Kyndykan diamond symbolised “resilience and strength of character, rich history and age-old traditions,” which Agureev explained is a common goal “to preserve all of this for future generations and to tell this story to the world.”

In September 2021, the company expressed support in preserving the cultural and historical values of indigenous populations in the remote territory of Yakutia, especially the Kyndykan project.

The Anabar river basin is home to the largest concentration of diamond alluvial deposits outside of Australia and Africa, where a 236-carat intense yellow-brown diamond- considered to be the largest natural colour diamond in Russia- was also discovered in 2007.