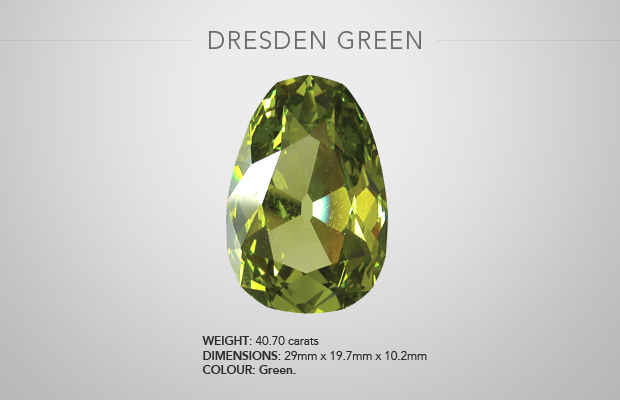 Its origin is unknown; however, the gem first appeared in a London news article in 1722 that read: “On Tuesday last, in the afternoon, one Mr. Marcus Moses, lately arrived from India, had the honour to wait on his Majesty (King George I) with his large diamond, which is of a fine emerald green colour, and was with his Majesty near an hour. His Majesty was very much pleased with the sight thereof.

“It is said there never was seen the like in Europe before, being free from any defect in the world; and he has shown his Majesty several other fine large diamonds, the like of which ‘tis said were never brought from India before. He was also the 25th to wait on their Royal Highnesses with his large diamond; and they were surprised to see one of such largeness, and of such a fine emerald colour without the help of a foil under it. We hear the gentleman values it at £10,000.”

The diamond is named after Dresden, the capital of Saxony in Germany where it has been on display for most of the last two centuries; it did make some sojourns to the Soviet Union following World War II and in 2000 to the Smithsonian Institute, Washington  – where it was displayed alongside the Hope diamond – but it currently resides in the Green Vault in the Albertinium Museum in Dresden.

The Dresden Green, which probably weighed over 100 (old) carats in its rough form, is unique among world famous diamonds and was originally probably an elongated, unbroken stone, since green diamonds rarely occur as cleavages. The stone’s green colour is due to its natural exposure to radioactive materials.

A 1726 letter from Baron Gautier, assessor at the Geheimes Rath’s Collegium in Dresden speaks of the green diamond being offered to Frederick Augustus I by a London merchant for £30,000.

Instead it was Augustus’ son, Frederick Augustus II, who became its first royal owner, buying the Dresden Green from a Dutch merchant named Delles at the Leipzig Fair in 1741.

Various figures are given for the purchase price but the most interesting was found in a letter to Frederick the Great, King of Prussia: “For the siege of Brünn, the King of Poland was asked for heavy artillery. He refused due to the scarcity of money; he had just spent 400,000 thaler for a large, green diamond.”

On orders of Frederick Augustus II, the court jeweller Dinglinger set the diamond in the Decoration of the Golden Fleece, but this setting lasted only four years before it was broken up in 1746.

The king then commissioned the Viennese goldsmith Pallard to design another Golden Fleece incorporating both the Dresden Green and the Dresden White, a cushion-shaped diamond weighing 49.71 carats.

From 1756 to 1763, during the Seven Years War, the contents of the royal Green Vault were removed for safety to the fortress of Königstein, located in southeast Dresden by the Elba River.

In 1768, another jeweller named Diessbach worked the green diamond into a hat clasp along with two other white brilliants weighing almost 40 carats, and a number of smaller diamonds.

The contents of the Green Vault remained on display to the public until the beginning of World War II when they were removed again to Königstein, thus escaping the shattering air raid by the Allied Forces on the night of February 13, 1945.

Later that same year, the Soviet Trophies Commission took the contents of the Green Vault to Moscow, where the Dresden Green stayed until it was returned in 1958. When the Gemmological Institute of America (GIA) examined the stone in 1988, the Dresden Green was proved to be not only of extraordinary quality, but also a rare, type IIa diamond.

The clarity grade determined by GIA was VS1 and, astonishingly, the GIA graded the symmetry good and the polish very good – rare results for a diamond cut prior to 1741.

In the summer of 2000, Ronald Winston completed arrangements for the Dresden Green to be exhibited in the Harry Winston Gallery at the Smithsonian Institution alongside the world’s most famous diamond – the Hope.

The Dresden Green has long been considered a “sister” to the Hope diamond, which it closely matches in size, intensity of colour, and historical importance.