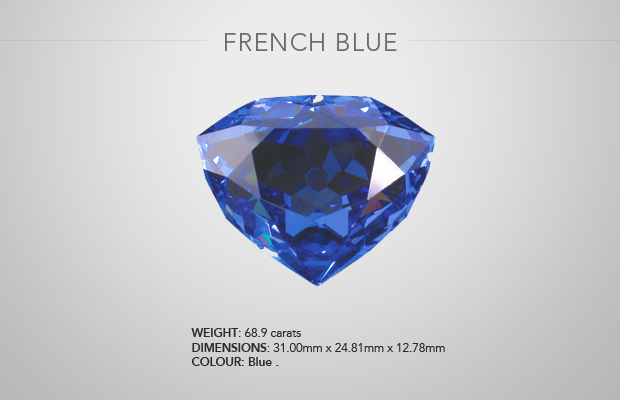 Between 1671 and 1673, well before it became the Hope diamond, the brilliant-blue French Blue diamond was cut from the Tavernier Blue diamond.

Under orders from King Louis XIV of France, the gem was cut into a shield-shaped stone weighing almost 69 carats, which was then known as the “Diamante bleu de la Couronne” (Blue Diamond of the Crown), or the French Blue.

It became a part of the French crown jewels and was incorporated into the Order of the Golden Fleece, an ornament containing the French Blue, the 32.62 carat Bazu diamond, several large white brilliant diamonds, and several hundred 0.1-carat diamonds in 1749.

The Golden Fleece was considered the most elegant and valuable piece of jewellery in all of Europe.

It was stolen in 1792, along with many of the French crown jewels, apparently broken up and the French Blue disappeared; however, in 1812, another blue diamond of 44.5 (old) carats surfaced in London. This stone later became known as the Hope diamond as was identified to have been cut from the French Blue.

The legends of ill-fortune following the possessor of this blue beauty are many. From the start Louis XIV was tremendously (and perhaps deservedly) unlucky. The king gave the diamond to Madame de Montespan, but she soon went into royal discard.

Then came a day when a great festival was given in Louis XIV’s honour. Nicolas Fouquet, French director of finance, had planned well for the occasion.

Fouquet borrowed the diamond, hoping to impress the court with his good taste, but it didn’t work out that way.

After the party, Louis XIV had Fouquet arrested for embezzlement, regained the diamond, and Fouquet was made a “quest” of the Crown at the Fortress of Pignerol where he died 15 years later.

Other wearers of the jewel at the Court of France might well have given credence to the legendary curse. Princess de Lamballie, and Marie Antoinette whole followed, both were guillotined during the French Revolution.