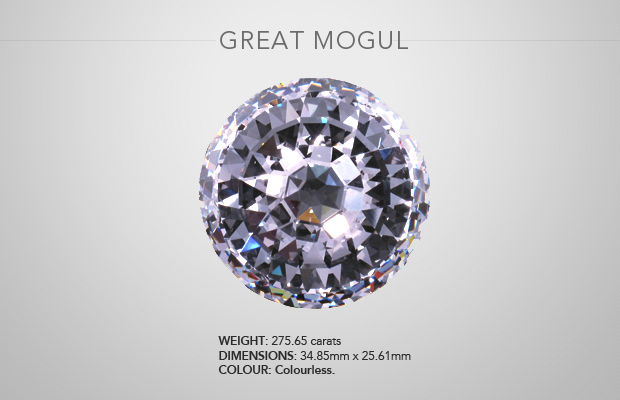 According to the famous French diamond merchant and explorer Jean Baptiste Tavernier, the Great Mogul was discovered around 1550 in the Gani mine near Galconda (India), and weighed 780 carats in the rough.

Tavernier was the first European to see the fabulous Great Mogul as well as the entire imperial treasure.

Emperor Aurangzeb possessed the Great Mogul at the time of Louis XIV.

He sent the stone to Venice to have it cut by Hortensio Borgis and Tavernier reported that the final shape “was that of an egg cut in half”, possessing nearly 300 facets and weighing about 280 modern carats.

This was a huge reduction in size – the original 780-carat rough contained many flaws, but the emperor was furious about the result. He refused to pay, and had the cutter whipped and heavily fined, ruining him.

Tavernier’s description in the mid-1600s is the only mention of this stone and the Great Mogul has seemingly disappeared into the dustbin of history, most probably taken from India during the sack of Delhi in 1739.

Many historians believe it became the Orlov diamond, currently in the Russian Diamond Fund.

The Orlov also has an “egg cut in half” shape, and it weighs approximately 190 carats. It would be difficult to assume that two diamonds share this unusual shape if they weren’t somehow related.