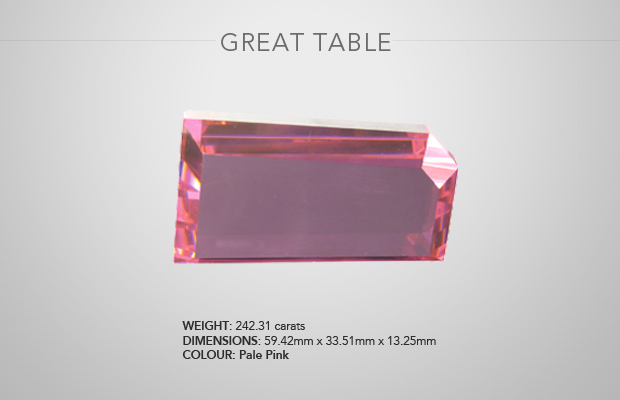 The Great Table diamond was first reported by gem merchant Tavernier in 1642.

In Tavernier’s list of the “largest and finest diamonds and rubies seen by him in Europe and Asia,” the Great Table appears third.

Of it he remarks: “It is a stone which weighs 176 1/8 mangelins, which make 242 5/16 of our (old) carats. When in Golconda, in the year 1642, I was shown this stone, and it is the largest diamond I have seen in India in the hands of dealers. The owner allowed me to make a casting of it, which I sent to Surat to two of my friends, calling their attention to the beauty of the stone and to its price, which was 500,000 rupees. I received a commission from them to offer 400,000 rupees for it, but it was impossible to come to terms at this price.”

Tavernier’s accompanying illustration shows the Great Table to be table-cut, so that it may be easily recognised should it again come to light in India or elsewhere but popular theory suggests the diamond has been broken up and has not been seen by any European expert since.

The Great Table is said to have been in the possession of the first Mogul emperor of India, from whom they descended to Mohammed Shah.

When the latter was defeated by Persia’s Nadir Shah during the sacking of Delhi in 1739, he surrendered all his chief valuables, including the diamonds and the well-known Peacock Throne.

After Nadir’s assassination in 1741, the gem was inherited by his grandson, Shah Rokh.

Later, it descended in succession to Mirza-Alam Khan Khozeime and then to Mohammed Hassan Khan Qajar. Finally, it came into the possession of Lotf-Ali Khan Zand, who was defeated by Aga Mohammed Khan Khan Qajar.

Aga Mohammed was succeeded by his grandson Fath Ali Shah in 1797, who was both a collector and connoisseur of gems and whose name is engraved on one side of the great diamond.

The Great Table is next mentioned by Sir Harford Brydges in 1791, a British diplomat hired by the Shah of Persia to sell some diamonds to raise funds so he could wage war on a neighbor.

At this time, Brydges reported that the stone was exactly as Tavernier had described. This is the last known reference to the stone’s sighting.