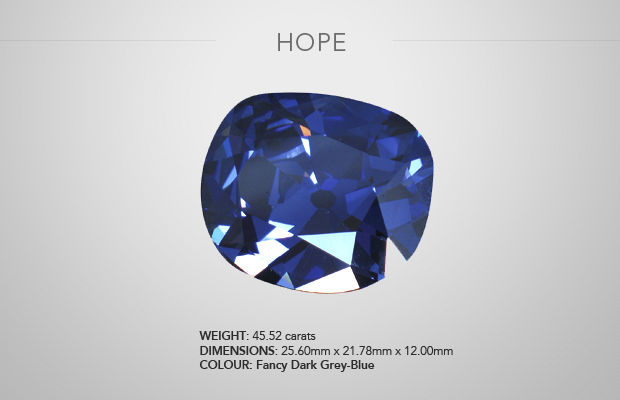 French diamond merchant Jean Baptiste Tavernier acquired the stone from a slave and sold it to King Louis XIV, whereupon the king had it cut into a triangular, pear-shaped stone weighing 67.50 carats.

Throughout its life as the Tavernier Blue diamond, and then the French Blue diamond, the fancy coloured stone garnered a reputation for ill-fortune that continued when it was eventually cut into the Hope diamond.

Following the death of Louis XIV, the French Blue diamond disappeared. It wasn’t until 1830 when a large, blue diamond of a different shape and weight (44.50 carats) appeared on the market in England and was purchased by banker Henry Thomas Hope.

Taking on its modern-day name, the Hope diamond was shown at the Crystal Palace Exhibition in London in 1851, where it was insured for the truly astonishing figure of one-million dollars – but then again, this was the largest diamond of its type in the world.

It was then inherited by a descendant of Henry Thomas Hope, Lord Francis Pelham Clinton Hope, whose wife left him and who eventually went bankrupt.

The Hope’s next owner was Abdul Hamid II, Sultan of Turkey, who purchased the diamond for $US450,000 and gave it to Subaya, a wife who he later executed. Hamid II had the jewel smuggled to Paris in 1911 where it sold to Evalyn Walsh McLean, but he did not receive a penny after he was dethroned and the proceeds seized by his successors.

In 1949, two years after her death, Harry Winston purchased the McLean collection, which contained not only the Hope Diamond but also the Star of the East. Winston later gave it to the nation and it is now on display in the Smithsonian Institute, Washington DC.

In 1975, the stone was removed from its setting to be cleaned and weighed. It turned out to weigh 45.52 carats, and not 44.50 carats as previously thought. This is attributed to the standardisation of the carat in the early 1900s.

Myths about the stone

This was later disproved beyond a shadow of a doubt by gem cutter and diamond replicator Scott Sucher, with the help of Steve and Nancy Attaway and the Smithsonian  mineralogy curator Jeffrey E. Post.

Sucher’s research also proves that no secondary gems were fashioned from the French Blue when it was recut into the Hope Diamond.