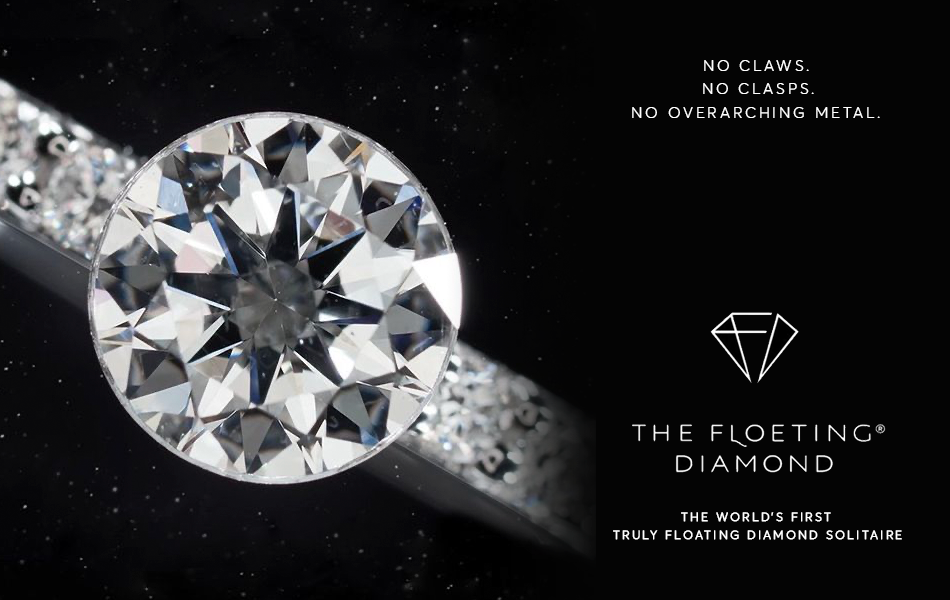 It took two decades, millions of dollars, and a box of ruined and ‘exploded’ diamonds for a Wellington jeweller to finally be a step closer to a billion-dollar payout.

What was previously thought to be an impossible feat for traditional jewellery design and manufacturing has become a reality for The Village Goldsmith founder Ian Douglas, who announced the launch of the Floeting Diamond – a diamond-set jewellery collection without metal clasps or claws.

Secured in place using proprietary tiny laser-cut grooves around the underside of diamonds, Floeting Diamond jewellery uses only high-quality stones to achieve the desired strength and appearance for its collection.

“The original concept came to mind almost 20 years ago, but it’s really only been the advancement in a lot of technologies, in metallurgy, in the development of space-age metals, the science of engineering with lasers, that have enabled this cut to come about,” Douglas told Stuff.

It is estimated that the value of diamond jewellery sales worldwide is $US90 billion ($AU126.6 billion) annually, half of which is spent in the US. Douglas hopes to get a 2 per cent share of the American pie, which is around $US1.8 billion ($2.5 billion) within the next five years.

For the first time since 1886 when the standard six-claw diamond setting technique was invented, the Floeting Diamond becomes a historical innovation for the international diamond jewellery industry.

Douglas invested millions of dollars in the development of the ground-breaking technique and several test diamonds were destroyed throughout the process.

“We contacted one of the world’s leading diamond cutting companies based out of Israel and had an agreement with them to prototype and test this concept, and they absolutely ruined it. I paid for this batch of diamonds that just got butchered,” Douglas said.

The journey was never easy, according to Douglas, who noted there were “heartbreaking” moments during the development stage when he was faced with a “massive bill”, especially when he was handed a “little box of cut and polished diamonds with the groove done completely incorrectly that had ruined their optical properties. So that got parked in the vault for a few years.”

“It’s just been horrific. Ten years, trips around the world to everywhere you can imagine, talking to all sorts of people, these institutes, the testing costs, material itself,” he explained.

“You can imagine having to test diamonds and things going wrong, we have literally blown diamonds apart.”

After 20 years of rigorous testing, the Floeting Diamond became a reality and uses a specially-engineered titanium alloy which was found to be 20 times more impact tolerant and 10 times more durable than traditional precious metal diamond settings.

Douglas said they are currently under scrutiny by industry rivals and added, “I think there’s probably a lot of people hoping that we’ll fail, but if we succeed they’ll be jumping on the bandwagon big time.”