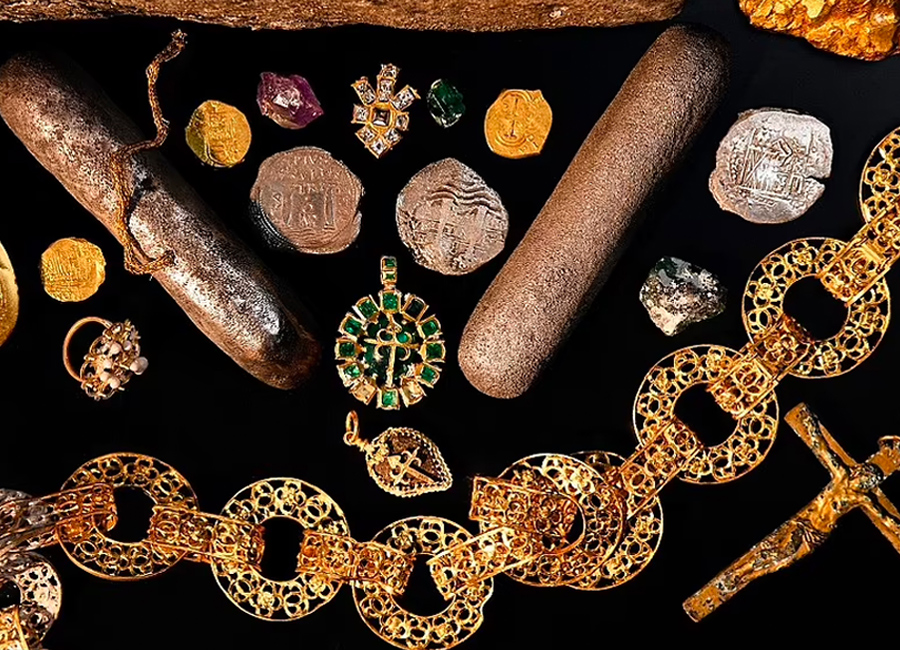 A priceless stash of jewellery has been discovered in the wreck of a Spanish galleon that sunk in the Bahamas in the 1600s.

The Nuestra Señora de las Maravillas (Our Lady of Wonders) sunk in shark-infested waters on the western side of the Little Bahama Bank off Grand Bahama Island, more than 70km offshore, in early January of 1656.

The galleon was returning to Spain with a manifest reporting five million pesos worth of treasure, including silver salvaged from a shipwreck in Ecuador. Historians believe much more treasure was likely on board, left unreported as contraband.

The galleon unexpectedly ran into shallow water and was rammed by another ship, forcing the captain to ground the Maravillas on a nearby reef.

More than 650 people were on board and just 45 survived the wreck.

The wreckage was scattered and Spanish salvagers recovered approximately one-tenth of the treasure. Additional recoveries were performed in the decades to come, however, more than half of the treasure remains unfound.

In the 1970s and 1990s major attempts at salvage resulted in the auctioning of treasure in New York and London.

Treasure hunters continue to brave the shark-infested waters to this day, and now Allen Exploration, working alongside Bahamian and US marine archaeologists and divers, has reported a major find.

Among the treasures discovered was gold filigree chain, with rosette motifs, and a gold pendant bearing the Cross of Santiago. The chain is five feet long and weighs two pounds.

Another pendant features a gold Cross of St. James over a large, green, oval emerald framed by a dozen square emeralds.

Clusters of emeralds and amethysts mined in Colombia suggest that the galleon was involved in trafficking treasures not listed on the manifest.

Carl Allen, founder Allen Exploration told The Guardian: “The colourful coral that divers remembered from the 70s is gone, poisoned by ocean acidification and choked by metres of shifting sand. It’s painfully sad. Still lying on those dead grey reefs, though, are sparkling finds.”

“When we brought up the oval emerald and gold pendant, my breath caught in my throat,” he said.

“I feel a greater connection with everyday finds than coins and jewels, but these Santiago finds bridge both worlds. The pendant mesmerises me when I hold it and think about its history. How these tiny pendants survived in these harsh waters, and how we managed to find them, is the miracle of the Maravillas.”

He continued: “The wreck of the galleon had a tough history. Heavily salvaged by Spanish, English, French, Dutch, Bahamian and American expeditions in the 17th and 18th centuries, and blitzed by salvors from the 1970s to early 1990s.

“Some say the remains were ground to dust. Using modern technology and hard science, we’re now tracking a long and winding debris trail of finds.”

The jewellery will be on display at the newly opened Bahamas Maritime Museum in Freeport, Grand Bahama.

Adapt or die! Stay on top of the social media game