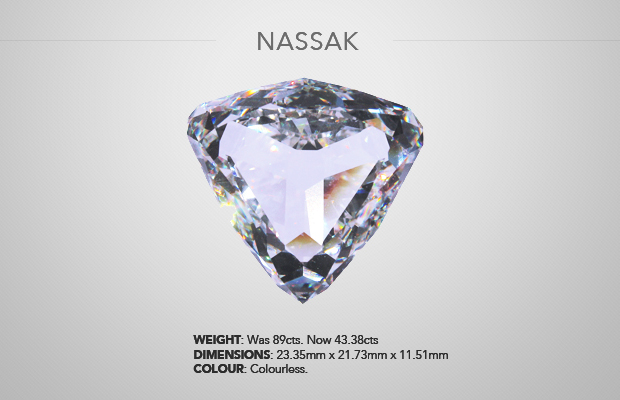 The Nassak is one of those unfortunate Mogul-cut stones that has been re-cut throughout history to appease more modern tastes.

The stone’s first record in history shows it as a triangular-shaped stone of approximately 90 carats. It was then re-cut to around 78 carats still triangular but with more rounded corners; however, this still didn’t meet the changing tastes of history, so it was sadly re-cut once more into a 43-carat rectangle – less than half its original size.

In the days of the Mahratta ascendancy, the town of Nassak was a noted place of pilgrimage. Situated 95 miles northeast of Bombay, Nassak drew thousands of devotees each year and, to this day, still holds some famous cave-temples.

The offerings of these worshippers of Shiva caused a gradual accumulation of vast treasures in the local shrines. While the Mahratta power flourished, these treasures were respected, but when they fell upon evil days, the Peishwas – the nominal heads of the great confederacy – helped themselves freely to the  “gifts of the gods”, thereby acquiring the means to carry on their incessant wars against rival chiefs, and finally against the all-absorbing Company Bahadur.

When Bajerow, the last independent Peishwa, surrendered to the British in the last Mahratta war of 1818, his baggage became the loot of the conquerors. Amongst the prizes of war seized on that occasion was this diamond, which the Peishwa had already taken from the temple of Shiva in Nassak, and which was thence known as the Nassak diamond.

It had been concealed by his orders, but was brought to light by Colonel J. Briggs who handed it over to the Marquis of Hastings, under whom the combined operations against the Peishwa had been coordinated and conducted.

The Nassak was brought to the London market in 1818, and sold by the East India Company in 1831. The successful purchasers, crown jewellers Rundell and Bridge, described the Nassak as “a diamond of great purity, but of a bad form,” with a weight of “79 carats and two grains”.

It’s important to note here that the listing of the diamond’s weight is a mistake, the most likely explanation being that it was supposed to say 89 carats.

“Its form is triangular and it is cut and polished, so as to retain the greatest possible weight, but it exhibits none of the qualities which it would so proudly display, if it had been well–proportioned.”

When it reached Europe, the Nassak resembled the Koh-i-noor very much in form and appearance. Like with that stone, the native cutter had sacrificed everything – especially symmetry and brilliance – for size.

In a move to give the stone greater brilliance, Rundell and Bridge had the Nassak re-cut to 80.59-carats, instructing the cutter to keep as closely as possible to the traces of the Hindu cutter: “Amending his defects and accommodating the pattern to the exigencies of the subject matter, they transformed the rudely-facetted, lustreless mass into a diamond of perfect brilliancy, at the sacrifice of no more than 10 per cent of its original weight.”

In the process, the Nassak became a triangular brilliant with lots of additional pavilion facets.

The Nassak remained with Rundell and Bridge for 10 years before being sold to the Emanuel Brothers in London in July 1831. It fetched the sum of £7,200 and its weight was stated to be 89 and 3/4 carats.

This is undoubtedly another error as the stone had shed approximately 10 carats in the cutting process overseen by Rundell and Bridge.

It was in the month of August 1837 that the Nassak and a number of other costly gems were put up for sale in Willis’s Lower Room, St. James. There, the Nassak was knocked down to the Marquis of Westminster, who also bought the Arcots Diamonds and the King George IV Diamond at the same auction.

At the Drawing Room on Queen Victoria’s birthday – immediately succeeding her accession to the British throne – the Nassak received a rare public outing when the Marquis of Westminster wore the gem on the hilt of his sword.

The diamond remained in the Westminster family for nearly a century. In the 1920s, it was sold to a Parisian jeweller who brought it to America in 1926 for display. The stone later returned to Paris where it was bought by Harry Winston in 1940.

Winston had the stone recut to its present flawless 43.38-carat, emerald-cut shape. He then sold it to a New York jewellery firm in 1942. Mrs. William B. Leeds of New York purchased the gem in 1944 and wore it in a ring before finally selling it at auction in New York in 1970.