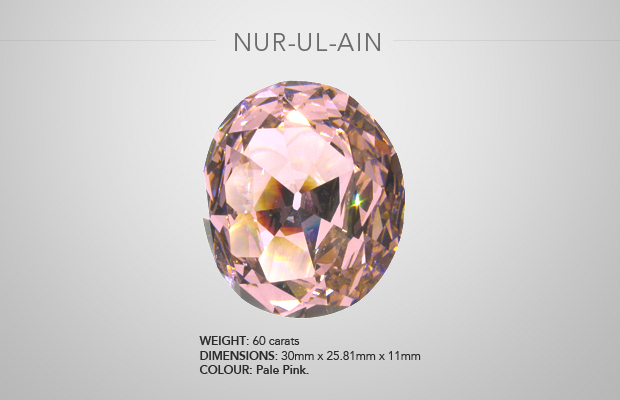 The Nur-ul-ain is a brilliant-cut oval diamond of around 60 carats. Its name means “light of the eye” in Persian and Arabic.

Discovered at Golconda in India during the 17th century, it is fancy pink in colour and one of the largest diamonds of its kind.

Together with the even larger Darya-i-noor diamond, it is considered one of the two most-celebrated gems among the Iranian crown jewels, where it remains to this day.

The Nur-ul-ain is the centrepiece of an exquisite Harry Winston tiara created in 1958 for the Empress Farah’s wedding to the last Shah of Iran, Mohammad Reza Shah Pahlavi.

The tiara contains 324 diamonds in all, but the Nur-ul-ain is the jewel in the crown.

Since the Nur-ul-ain disappeared into Iran, authorities have declined to release any information concerning its weight and measurements.