Shopping centres in Melbourne and Sydney were flooded with thousands of people trying to get their hands on the latest headline generating timepiece on Saturday 26th of March, ahead of other major global markets.

So, what was the watch generating all the buzz? Well, watches to be exact: the new OMEGA x Swatch Speedmaster BIOCERAMIC MoonSwatch collection.

There are 11 models in the collection paying tribute to the very solar system we inhabit, with each model designed after one planetary figure. Each planet from Mercury to Pluto has been covered, as well as the Sun and Moon. The watch was set to launch globally on the 26th March, which meant that Australia was one of the first countries to launch the model, ahead of the US and European markets.

The watches are designed and modelled after the iconic OMEGA Speedmaster Professional Moonwatch, which was made famous after US astronaut Buzz Aldrin wore the watch during the 1969 mission to the Moon.

In Melbourne, shoppers formed lines outside the Swatch store at the Chadstone Shopping Centre well before the doors were opened at 9am with some having lined up at 6pm the Friday before and turning up in the middle of the night to join the queue. It was a similar story at the Pitt Street Boutique in Sydney.

It seems that Australians are not the only people caught up in the frenzy, with similar queus observed everywhere from Hong Kong to London, Singapore and New York City. The crowd of anxious shoppers in New York City reportedly topped 2,000 – despite the Fifth Avenue store claiming they had just 150 units available.

Unfortunately the story didn’t end with a happy ending for every shopper, with Swatch announcing via social media that purchases would be limited to one per customer in order to satisfy the demand.

» Watch Videos of the MoonSwatch launch in Melbourne and Sydney

“Due to the unexpected and phenomenal demand, we are obliged to update the purchase limit to one watch per person until further notice,” the statement reads.

“We will revert back to two watches per person as soon as possible.

“The watches are not limited and will be available in selected Swatch Stores, with more opportunities to purchase in the coming weeks.”

Police officers were used to monitor crowds in Australia without incident but in Singapore one man was involved in an altercation which drew comment from Law and Home Affairs Minister K Shanmugam on Sunday.

In a post on social media, the minister called for a “sense of perspective” from shoppers.

“We don’t need to lose our minds over these situations. It’s not life and death.”

Much of the hype generated by the OMEGA x Swatch Speedmaster BIOCERAMIC MoonSwatch collection has come about due to the pricing. At just $AUD380 per watch, the collection offers customers the chance to own a watch close to the iconic Speedmaster at a fraction of the cost.

For comparison, the OMEGA Speedmaster Professional Chronograph 42mm goes for around AUD$7,600. That goes a long way towards explaining the demand for taking early possession of the piece.

Online auction sites such as eBay are already seeing watches listed at more than five times the retail price.

Another reason for the excitement has been the origins of the collection as a unique collaboration between luxury juggernaut OMEGA and industry icon Swatch. 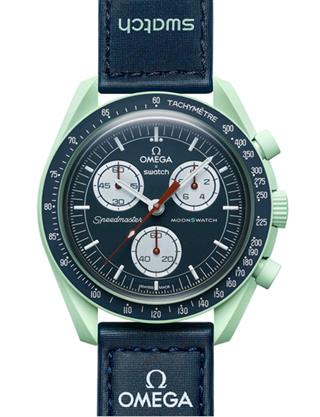 Police presence was required to man the line at Chadstone in Melbourne
spanned hundreds of meters and began building at 6pm the previous day.

A local Melbournian vlogged the launch from 3:28am on the eve of the MoonSwatch launch at Chadstone.

Time+Tide Watches chronicles the madness of the launch at the Swatch boutique in Geneva, Switzerland.