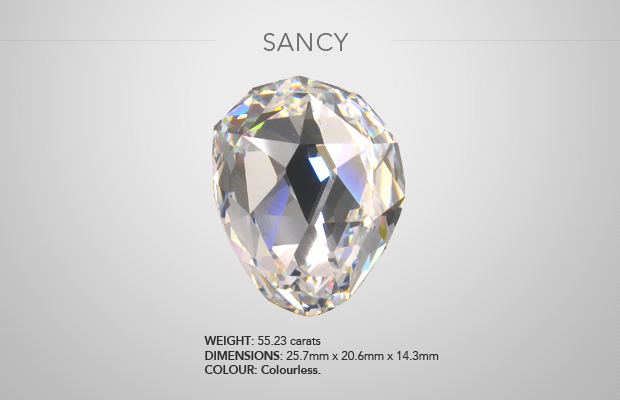 Colourless with a greenish-yellow tint, the Sancy is a 55.23-carat, shield-shaped stone said to be one of the first diamonds to be cut with symmetrical facets. It is also unusual because the gem has no pavilion – just a pair of crowns.

In 1570, the Sancy was purchased in Constantinople by the French Ambassador to Turkey, Nicholas Harlai. The Seigneur de Sancy, as he was known, was an avid collector of gems and he brought the diamond to France where Henry III borrowed it to decorate a small cap.

During the next reign, when Harlai was made superintendent of finance, Henry IV borrowed the gem as security for a loan to hire soldiers.

Following this, Harlai sold the diamond to James I and it remained in England until James II fled to France in 1669, selling the stone to Louis XIV.

Others say the Sancy was pledged to the Duke of Epernon for 460,000 livres. In 1657, Cardinal Mazarin paid off the Duke and bequeathed the Sancy to Louis XIV. In 1792, at the beginning of the French Revolution, the Sancy and other famous gems were stolen from the Royal Treasury in Paris.

It reappeared in 1828 and was sold by a French merchant to Prince Anatole Demidoff of Russia, who is recorded as selling it in 1865 for $US100,000.

Two years later, it was displayed bearing a price tag of one million francs at the Paris Exhibition by a French jeweller, G. Bapst.

In 1906, the sancy was purchased by William Waldorf Astor as a wedding present for his daughter-in-law. Upon her death in 1964, the celebrated stone was set in a mounting that permits it to be affixed to a head ornament.

It is now in the Louvre Museum in Paris.