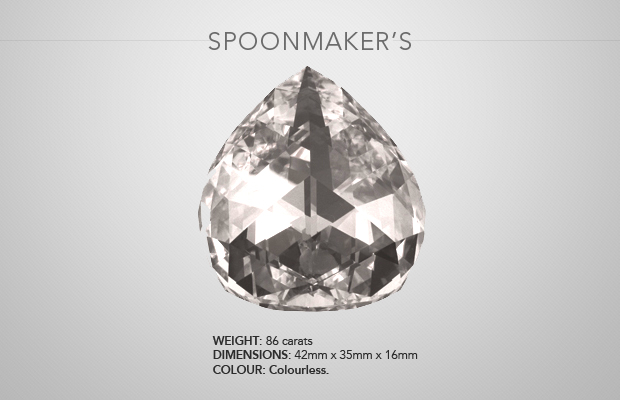 The Spoonmaker’s origin is not clear; however, the official historian of the Ottoman court, Rasid, describes it thusly:

“In the year 1669, a poor man found a pretty stone in the rubbish heap of Egrikapi in Istanbul. He bartered it to a spoonmaker for three wooden spoons and the spoonmaker sold the stone to a jeweller for ten silver coins. When Sultan Mehmed IV is told of the affair, he orders the stone be brought to the palace, and he takes possession of it. Whether he paid for it is not revealed.”

More probably, a French officer named Pikot bought the diamond from the Maharajah of Madras in 1774. He took it to France but thieves got wind of the gem and stole it.

Sometime later, a large diamond about the same size appeared at an auction, and the notorious Casanova made a bid for it. The diamond became known for a time as the Casanova Lottery diamond.

The Spoonmaker was finally bought by Napoleon’s mother, Letizia Ramolino, who later sold her jewels to help her son escape from Elba in 1815.

An officer of Tepedelenli Ali Pasha bought the great diamond for 150,000 pieces of gold and put it in Tepedelenli’s Treasury. When he was killed in the revolt against Sultan Mahmut II, his entire treasury was moved to the Palace of Turkey.

There is a discrepancy in the historical record concerning the weight of the Spoonmaker. It is reported as 86 carats, yet documentation from the early 1800s states that it is the third largest diamond in the world and it’s hard to imagine a gem of its size to weigh 86 carats.

Could the stone’s weight have been under-reported for over 200 years? Due to the variability in dimensions, girdle depth, and multiple solutions to the modelling problem caused by insufficient information, it’s possible that the actual diamond could weigh as much as 186 carats – meaning at some time in the past two centuries, someone dropped the leading digit!