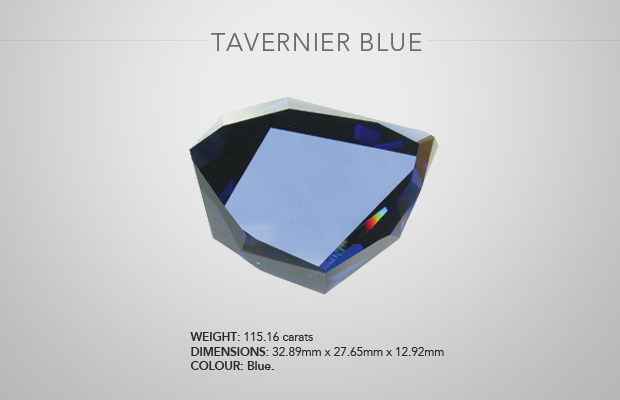 There are diamonds of many different colours that are of high value. There are diamonds as green as the Elysian Fields, as black as the night sky and as yellow as the sun’s own fire, but few are as exquisite and as rare as diamonds blessed with the hue of a deep ocean blue.

Also known as “D’un beau violet”, the Tavernier Blue diamond was found in India around 1610 as a rough crystal weighing slightly over 115 modern carats.

It first came to light when noted French diamond merchant Jean Baptiste Tavernier was approached in India by a slave who had an intriguing blue stone in his possession; it seemed to be a large sapphire but was, in fact, a huge blue diamond known today as the Tavernier Blue.

Legend has it the diamond came from the eye of an idol in a temple on the Coleroon River in India. If that is so, one can only assume that the eye must have a mate but the fate of the “other” eye has never come- to light.

It would not be the first famous diamond that started its notoriety in a religious idol – according to legend, the Idol’s Eye and the Orlov both came from idols.

Tavernier purchased the Tavernier Blue and took it to Paris where he later sold it – along with 24 other diamonds – to King Louis XIV in 1668 for a princely sum and a noble title.

The sale proved to be Tavernier’s final meal ticket; he retired shortly after, purchasing a great estate where he spent his remaining years with his loved and trusted son.

Interestingly, Tavernier wasn’t spared the the ill-luck that was said to pursue the famous gem merchants and purchasers of those Indian diamonds.

Although the Tavernier Blue permitted him to retire, the intrepid explorer’s son entangled his aged father in such debt that he was forced to sell the estate the diamond had helped him to buy.

At the age of 84, Tavernier ventured out once more to the East but was attacked by fever and perished before his journey could be completed.

As for the stone, the Tavernier Blue was cut in the ancient Indian style of cutting, which placed greater emphasis on size and less on symmetry and brilliance.

Resultantly, it was essentially a polished river pebble – this conflicted with the European concepts that diamonds should be both symmetrical and brilliant. King Louis had the stone recut starting in 1671.

When it was finished in 1673, it was now known as the “diamante bleu de la couronne” (blue diamond of the crown), or the French Blue.