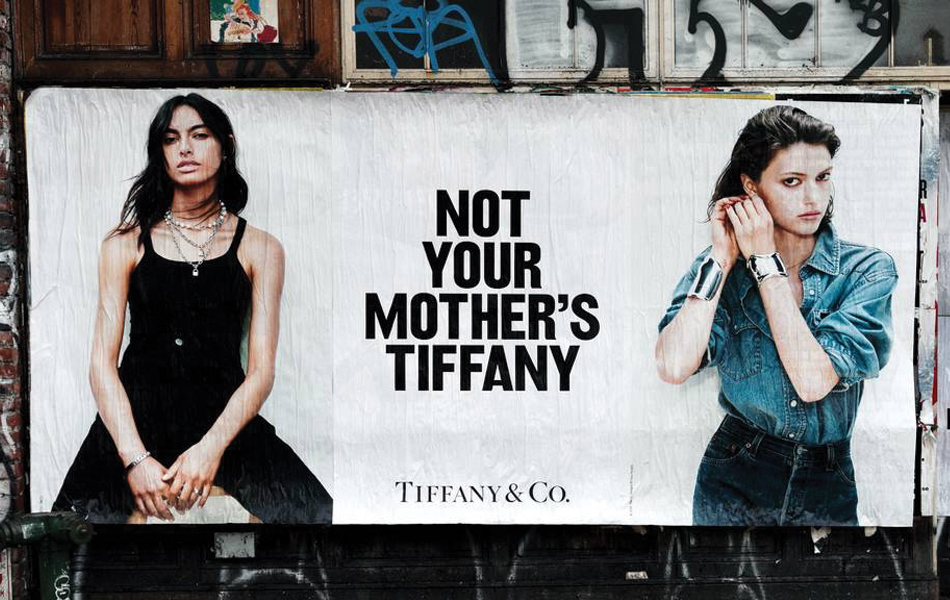 Tiffany wasn’t just getting a takeover, but a makeover. However, not everything has gone according to plan.

Barely two months into the acquisition, Tiffany & Co. cancelled its New York Times print-edition advertisement, which had run on page 3 since 1896.

The re-branding continued with a controversial billboard campaign bearing the slogan, ‘Not your mother’s Tiffany’. The intention was clear – positioning Tiffany as a youthful, on-trend, and unpretentious brand, accessible to Gen Z

According to a report in the Wall Street Journal (WSJ), “It seemed like a perfect union when LVMH acquired Tiffany & Co. and the two companies agreed to the takeover in late 2019. The combination combined a well-known but faded jeweller with a deep-pocketed French conglomerate, betting its future on expansion into China and Europe.”

However, Pauline Brown, who was chairman of LVMH North America from 2013 through 2015, believes Tiffany’s new management is underestimating the cultural challenges.

“The senior-most decision makers in Tiffany’s C-Suite are not American,” she told the WSJ.

Brown, who is now a Columbia Business School professor added: “They assume that because they speak fluent English and, in some cases, have worked in America, that they understand the American mindset.

“But they are trying to impose a strategy that won’t necessarily gel for the brand’s core customers or employees”.

The article goes on to say that the French takeover of Tiffany & Co. started with insults, lawsuits and accusations of mismanagement. Then things got really uncomfortable.

Soon after LVMH closed its $US15.8 billion acquisition of the American jewellery retailer in January 2021, it replaced several of Tiffany’s senior leaders with executives from other parts of the LVMH empire.

Some remaining employees joked that French lessons were a prerequisite for job security.

In February, Jeweller reported that LVMH held a “town hall” meeting for Tiffany & Co. employees in which management outlined a shift in focus toward “high-end, sparkling jewellery” and away from affordable, sterling silver product lines.

In a video message broadcast at the meeting, LVMH chairman and CEO Bernard Arnault said, “We will also prioritise Tiffany’s long-term desirability over short-term constraints.”

» Background reading: TIMELINE: Inside the Tiffany & Co. and LVMH merger

According to the WSJ report in April, a group of Tiffany staffers circulated an unsanctioned memo offering tips on “Franco-American cultural nuances and etiquette.” It advised against discussing weekend plans while waiting for a meeting to start.

Tiffany’s new chief executive, Anthony Ledru, denounced it after it circulated, disputing the notion that people had to assimilate to succeed at their jobs. He told his team “we are not aligned with this,” Mr. Ledru said in an interview at his Manhattan office.

Bridging the cultural divide is not the only challenge facing Tiffany’s new owner. The other is strategic. LVMH is trying to reboot what it sees as a sleepy brand that hasn’t kept pace with Cartier, Chopard and other luxury jewellers.

Jeweller reported that a source said, “LVMH can give Tiffany the kind of time and money needed to make some big investments in the product range and in stores worldwide, and wait for those to pay off in the medium term.”

The takeover has not been without controversy. In September, Jeweller reported that six months after assuming control of Tiffany & Co., LVMH unveiled a new advertising campaign starring celebrity couple Beyoncé and Jay Z, which immediately provoked a backlash among some consumers.

Entitled ‘About Love’, the campaign pays homage to Audrey Hepburn’s iconic performance in the 1961 film Breakfast At Tiffany’s, with Beyoncé wearing a form-fitting black gown and the Tiffany Diamond, a 128.54-carat canary yellow stone set in a diamond pendant – making her the first woman of colour to do so.

The diamond was unearthed at the Kimberley Mine in South Africa in 1877, while the region was still under British colonial rule.

The decision to showcase the diamond prompted criticism on social media for its colonial legacy, with some referring to it as a ‘blood diamond’; however, the United Nations defines a blood diamond, also known as a conflict diamond, as a stone that is mined in areas controlled by forces opposed to the legitimate, internationally recognised government of a country and that is sold to fund military action against that government.

Neither Tiffany & Co. nor Beyoncé and Jay Z have commented on the controversy.

In the three months to 30 September 2021, revenues for the division – which includes jewellery brands Bulgari, Chaumet, and Fred, and watch manufacturers TAG Heuer, Zenith, and Hublot, in addition to Tiffany & Co. – had increased by 125 per cent, reaching !2.14 billion ($A3.3 billion), according to the company’s most recent financial report.

However, the WSJ pointed out that LVMH, which owns dozens of brands, from the Christian Dior fashion house to jeweller Bulgari to Hennessy cognac, has struggled with its American acquisitions.

It sold Donna Karan in 2016 after failing to turn around the money-losing fashion label. Marc Jacobs also lost money for years, though it turned a profit last year after layoffs at the brand.

Arnault is under pressure to show investors the big Tiffany bet will pay off.

To make Tiffany more competitive with other luxury brands, WSJ outlines that LVMH is orchestrating an overhaul that includes higher prices, a push to sell more high-end jewellery – such as a necklace made of 180 carats of diamonds with an 80-carat diamond at its center, unveiled in Dubai this past November – and the introduction of new fine-jewellery collections, Mr. Ledru said.

Jeweller reported that during an investor call in April Jean-Jacques Guiony, LVMH’s chief financial officer, said, “It will take years to do what we want to do with this brand, from a distribution, merchandising, and marketing viewpoint. It is a lot of work – we are committed to doing it.”

It’s clear that the French conglomerate has the will and the money to turn big plans into reality. But first, it must work out exactly what it wants Tiffany to be.

The WSJ article says that Tiffany remains very much a US company. As of 2019, it got 43 per cent of its sales from the Americas, putting it at a disadvantage to Cartier and other jewellers that have a larger presence in the lucrative Chinese market, analysts said.

Overall sales totaled $US4.4 billion in 2019, the last full year for which it reported results. Financial figures for Tiffany no longer are broken out.

Despite its blue box pedigree, Tiffany has long relied on less-expensive silver jewellery for a large chunk of its sales. Jewellery categories with an average price of $US530 or less made up 45 per cent of sales in 2016. Analysts worried that Tiffany was allowing the proliferation of silver jewellery to weaken the brand.

Under LVMH, Tiffany is raising prices on silver and in some instances pairing it with other precious metals and stones. Prices on certain collections are up 7 per cent to 13 per cent from 2020, according to the company. Increases are bigger for some items, such as a ‘Return to Tiffany’ silver charm bracelet—$US425, versus $US300 a year ago. Some of the increases reflect the rising cost of raw materials, the company said.

“They are OK with losing some consumers,” Erwan Rambourg, the head of consumer and retail research at HSBC told WSJ. “They want to compete with Cartier, not with Zales.”

In its first financial update for 2021, LVMH reported revenue of €13.96 billion ($AU21.6 billion), an increase of 32 per cent compared with the same period last year.

» Background: Controversy and confusion: Timeline of the Tiffany & Co. and LVMH merger