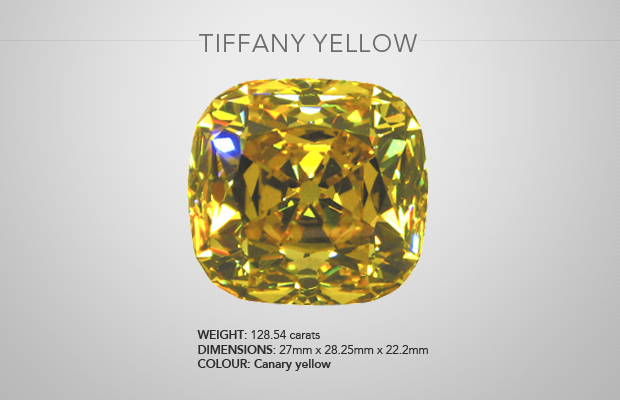 In the rough, the Tiffany Yellow was a beautiful, canary-yellow octahedron weighing 287.42 carats and possibly found at either the De Beers or Kimberly mines in South Africa in 1877.

A clue to its origin was supplied by one writer who stated it was found in the mines of the Compagnie Français de Diamant du Cap, an important mining concern otherwise known as the French Company.

Helping these claims is that the gem was first shipped to Paris where experts studied it for one year before it was cut by distinguished gemmologist George F. Kunz in 1878 to yield a cushion-cut brilliant of 128.54 carats. It was given a total of 90 facets – 48 on the pavilion, 40 on the crown, plus the table and culet – and these extra facets were cut not to give the diamond more sparkle, but to make it smoulder as if lit by fire. High in fluorescence, the gem retains this rich colour in artificial light but is even more beautiful by day.

Gideon Reed, the head of Tiffany and Co’s office in Paris, bought the Tiffany Yellow on behalf of the firm for $US18,000 and imported it to the US in 1879. Initially, little publicity attended the diamond after its arrival, a deliberate policy ascribed by Charles Tiffany’s fears that the diamond would be considered just another of South Africa’s yellowish gems, not recognised for its deep canary yellow hue.

It wasn’t long before the Tiffany Yellow did become widely known. In 1896, Chinese leader Viceroy Li Hung-Chang asked to see the diamond when visiting New York.

Since then, the gem has been seen by millions of others in almost 70 years of continuous display in Tiffany’s flagship store. It has also been shown at numerous exhibitions, including the Chicago Columbian (1893), the Pan-American (1901), the Chicago Century of Progress (1933) and the World’s Fair (1939).

The gem also received a rare public wearing when worn in 1957 by Sheldon Whitehouse, chairwoman of the Tiffany Ball and returned to South Africa in 1971 for an exhibition marking 100 years of the Kimberly Mine.

Throughout its rather uneventful history, the Tiffany Yellow has been offered for sale twice. Firstly in 1951 when the new chairman of Tiffany’s recommended that the gem be sold – a decision that horrified certain members of the old board. A buyer was found offering $US500,000, but the deal collapsed over the method of payment. Then, on November 17, 1972, the New York Times carried a Tiffany ad offering the diamond for $US5 million.

To this day, no major gemmological organisation has formerly examined the Tiffany Yellow. The closest description comes from Herbert Tillander in his book Diamond Cuts in Historic Jewelry – 1381 to 1910:

“The golden-yellow Tiffany is not only a typical stellar-cut brilliant with a star-like arrangement of small facets around the culet, but the crown is stepped, which consequently involves splitting the main facets. This was a standard procedure. The pavilion, however, received three steps: between the regular two steps, a third was applied, which was probably unique. This involved the splitting of the lower main facets into two triangular and one flat keystone-shaped facet.

“Consequently, the Tiffany Yellow Diamond received 40 actual facets on the crown and 48 on the pavilion, plus the compulsory table and culet – in all, 90 facets compared with the 56 plus two facets of the standard brilliant cut.”

No one has ever explained why such a bulky cut was applied. Interestingly, Kunz states, “This unprecedented number of facets was not to make it more brilliant, but less brilliant.”  A smouldering effect was thought better than flashing radiance.

The Tiffany Yellow has an unusual feature of retaining its colour by artificial light. The designers decided to ignore the modern rules of proportioning since these would have produced a brilliant-cut well below 100 carats.

In the end, the diameter of the finished gem was weighed against a symmetrical outline, but the height of the crown, the thickness of the girdle and the depth of the pavilion could all be substantially increased. In fact, they managed to retain a vertical measurement of 81.5 percent (22.2mm) as compared with the modern 60 per cent.

Until the Tiffany Yellow is professionally examined, two queries remain unsolved: the four extra facets on the pavilion, adjacent to the girdle, and the oft-mentioned 17 polished spots on the girdle which, according to a check-up at the premises of Tiffany in 1945, are “no true facets”.

It should be noted that a clarity of VS1 has been mentioned for the stone; however, this might have been an educated guess by a Tiffany official rather than an actual clarity grade.

British gemmologist Michael Hing handled the Tiffany Yellow at an exhibition in Paris in 2000 and said that the diamond had signs of wear, and that there was a noticeable scratch in the table facet. Hing offered to repolish the diamond but Tiffany’s refused.

Hing has also said that the “lack of wording” in the colour descriptions of the Tiffany Yellow is a hint at what the stone’s colour is. The diamond is described as “canary yellow” or “golden-yellow”, but these are not actual gemmological colour grades, which would be “fancy intense yellow”, “fancy light orangey-yellow” or something like that.